Question:  Does this drawing justify slaughtering a woman?

Isis, Shmisis.  Boko Haram, Shmoko Haram.  Al Quaida, Al Shmaida. Taliban, Shmaliban.  This seems absolutely hopeless.  I and others much more prominent than I have been writing, publishing, broadcasting and publicly speaking for years about the invasion of Islam and all the horrors its culture brings with it onto our American shores.  We have two huge problems:

2)  Nearly fourteen years after the 9/11/01 jihad attacks killed some three-thousand Americans, neither our national leaders nor our press corps members seem to in any way understand who is at war with us.  Yet, the misunderstood war drags on – forever.

Today’s featured story, ladies and gentlemen, is that ISIS (the Muslim nemesis du jour) tweeted Pamela Geller‘s home address to the World of Islam and issued a directive that Muhammad’s followers hunt her down and kill her.  By the way, there have already been two plots to murder Pamela (that we know about) both of which ended in gunfire and death.  Three Muslim would-be assassins are dead, two of them gunned down in Garland, Texas, and one in Boston.

With thanks to the International Business Times, via Gateway Pundit, here it is:

The personal address of an anti-Muslim activist was tweeted Friday from a Twitter account bearing the name of a man believed to be a British Islamic State jihadist kingpin. The tweet about Pamela Geller, who heads a group called the American Freedom Defense Initiative, came just hours after a third man connected to a plot to kill her and murder Boston police was arrested.

Anti-Muslim Activist.  What an ugly-sounding term.  Sort of creates an inference that Pamela Geller is the problem here.  Maybe, if she just apologized for her exercise of free speech and stopped speaking about the worldwide jihad and Shariah movement, everything would be forgiven and we could all go about our business as nice, quiet, unquestioning, submissive dhimmis.  After all, that’s what the Quran and the hadith collections say we’re supposed to be.  We non-Muslims are supposed to feel ourselves subdued before our Muslim masters, don’t you see?  It’s in the Quran.

“#GoForth,” the Tweet urged via a hashtag after revealing Geller’s New York City address, apartment number and all. The Twitter account that sent out the address has since been suspended.

In May, two gunmen were killed and one security guard was injured in Texas during a controversial“draw Muhammad” contest that was organized by Geller. ISIS soon after claimed responsibility for the attack at the contest, which welcomed renditions of the Prophet Muhammad, a provocative act for many Muslims who believe that the prophet should not be depicted or mocked in any way.

Ah.  Now I see it.  Overt plots and attempts to murder Pamela Geller are not nearly as controversial or provocative as that damnable caricature contest she sponsored.

In spite of that shooting, a man in New Hampshire was planning another “draw Muhammad” event, according to Seacoast Online. Jerry DeLemus, a resident of Rochester, New Hampshire, plans to hold the contest in spite of the shooting. The event is expected to take place later this year. “I’m not worried about taking a risk,” DeLemus said Thursday. “It’s more important to defend our way of life in this country, our constitutional rights, for everybody,” he said.

Isn’t it odd that people who organize these kinds of counter-jihad activities eventually have to hire 24/7 security, or just go into hiding somewhere?  Now, in the event that someone sponsored a draw Jesus cartoon contest, how many Christian death fatwas would issue?  Would the Pope order a hit?  How about a draw Moses contest?  Would the World of Judaism call for the head of the sponsor?

Answer to all the above questions:  NO.

And this is what America has yet to understand about Islam.  Islam has always been spread by the sword.  The point of the sword.  The threat of impalement on the sword.  Death.  Unbearable agony.  Submit or convert.  And the Muslim war against the world of Infidels is eternal, until all the Earth is united under the Shariah.  Strange – I never learned that sort of idea about Christianity in the Presbyterian Church, of which I was once a member.

DeLemus recognizes that the event could be offensive and blasphemous to Muslims but is unconcerned. He has said that the need to protect and defend free speech rights is more important than the risk associated with another draw Muhammad event.

Ah, now I see it.  Offending Muslims and violating the blasphemy laws of Islam are much more serious offenses than murdering the people who would exercise their rights to free speech.  People who offend Islam deserve to die.  That’s what Muslims believe?  Yes.  That’s what they believe. 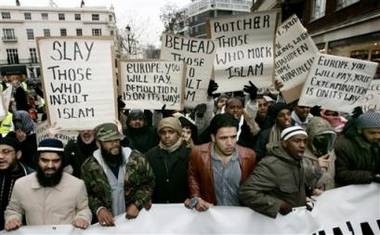 The contest in Texas was organized months after the January Charlie Hebdo shooting in Paris, where nearly a dozen staffers were killed for the satirical publication’s provocative depictions of Muhammad on a series of the tabloid’s covers.

For God’s sake, don’t you dare in any way provoke the followers of the religion of peace.  Because they’ll not-so-peacefully kill you if you do provoke them.

The two men charged in Boston with the plot to kill Geller reportedly were working with a third man who was killed by police last week.

ISIS isn’t our problem, ladies and gentlemen.  Islam, itself, is our problem.  Don’t believe me?  Watch this video.  Read my book.

John Lloyd Work has taken the detective thriller genre and woven an occasional political thread throughout his books, morphing what was once considered an arena reserved for pure fiction into believable, terrifying, futuristic, true-to-life “faction”. He traveled the uniformed patrolman’s path, answering brutal domestic violence calls, high speed chases, homicides, suicides, armed robberies, breaking up bar fights, and the accompanying sporadic unpredictable moments of terror - which eventually come to all police officers, sometimes when least expected. He gradually absorbed the hard fact that the greatest danger a cop faces comes in the form of day-to-day encounters with emotionally disturbed, highly intoxicated people. Those experiences can wear a cop down, grinding on his own emotions and psyche. Prolonged exposure to the worst of people and people at their worst can soon make him believe that the world is a sewer. That police officer’s reality is a common thread throughout Work’s crime fiction books. Following his graduation from high school, Work studied music and became a professional performer, conductor and teacher. Life made a sudden, unexpected turn when, one afternoon in 1976, his cousin, who eventually became the Chief of the Ontario, California, Police Department, talked him into riding along during a patrol shift. The musician was hooked into becoming a police officer. After working for two years as a reserve officer in Southern California and in Boulder, Colorado, he joined the Longmont, Colorado Police Department. Work served there for seven years, investigating crimes as a patrolman, detective and patrol sergeant. In 1989 he joined the Adams County, Colorado Sheriff’s Office, where he soon learned that locking a criminal up inside a jail or prison does not put him out of business. As a sheriff’s detective he investigated hundreds of crimes, including eleven contract murder conspiracies which originated “inside the walls”. While serving on the Adams County North Metro Gang Task Force and as a member of the Colorado Security Threat Intelligence Network Group (STING), Work designed a seminar on how a criminal’s mind formulates his victim selection strategy. Over a period of six years he taught that class in sheriff’s academies and colleges throughout Colorado. He saw the world of crime both inside the walls and out on the streets. His final experiences in the criminal law field were with the Colorado State Public Defender’s Office, where for nearly two years he investigated felonies from the defense side of the Courtroom. Twenty-two years of observing human nature at its worst, combined with watching some profound changes in America’s culture and political institutions, provided plenty of material for his first three books. A self-published author, he just finished writing his tenth thriller.
View all posts by John L. Work →
This entry was posted in A Summons To Perdition, Islam, Islamization, Jihad and tagged Boko Haram, Fatwa, Garland, ISIS, Islam, Jihad, Muhammad cartoon, Pamela Geller, Shariah, Terrorism, Texas. Bookmark the permalink.